I’ve never been keen on the beginning of a new year. For self-employed and self-motivated by necessity creative folks, it seems to me there is always a bit of a pile up in one’s mind of tasks, long and short, which need attending to. I’m sure you’ll know what yours are. So as I’ve been checking in with other people’s blogs this week, I’ve been having mixed reactions. Everyone has been circumspect rather than too starry-eyed which I did appreciate and which exemplifies the thoughtfulness of the creative people I happen to follow. There have been reflections on the previous year in respect to what has been achieved, as well as lists of what is to be attempted in the coming year. This reflection and planning is of course very natural, so I do understand why it is so widespread and I do it myself – but here’s the thing, I don’t like it.

Funnily enough the opening paragraph of my drafted novel, After Black, addresses the unpleasant feelings of a brand new year, as the story begins in a new year:

‘Christmas was over and she was glad to see the back of it. It was now Monday morning and a fresh start in the new year of 1990. An early January drizzle was spitting onto the kitchen window, a mirror of blackness intensified by the harsh electric light blazing from inside. The outer darkness shrouded the grizzled winter garden and fields beyond. Janet always used to find January a raw kind of month, feeling exposed to the glassy edges of another year ahead. Any hopes she dared to foster always seemed to be swatted like flies.’

The description of the rawness and glassy edges of January come from my own feelings over the years, which I felt would fit my character’s perspective well. After the rosy glow of pre-Christmas anticipations, after the suspended animation between Christmas and New Year, and then after New Year’s celebrations, whether you go to a party or read a book (as I did ;>)), there is a sense of energy expended before an onslaught of adverts begins for bargain three piece suites, holidays in the sun, and vibrapower machines to jiggle and shake away the spread you’ve put on after enjoying your Christmas feast. And then the new year resolutions you may have made, feel as if they should begin in earnest – while the days are still short and dark, while we are still in the winter season, while energy is still flagging. And it’s this that doesn’t seem to fit. As Galen Pearl suggests in her aptly entitled blog post  ‘Not so fast’,  wouldn’t a new year be better off beginning in the spring? Now I can totally understand this idea because spring brings a renewal and a bursting forth of new energy and new growth in the natural world, which can better promote these ‘got forth and do’ feelings within us, our own cycles being interwoven with the seasons. Instead, we ask ourselves ‘to go forth and do’ in what is a season of rest and hibernation.

So if you feel this way, if you feel the mismatch, how do you tackle a new year? The shoulds, the oughts, the musts? Well, I think I’ll go with Galen on this one. I’m going to try to see this time of year as nature intended :

But now I see the wisdom of quiet reflection at the beginning of something new. At the beginning of a race, the runners get in position and there is a moment of stillness before they are released to surge forward.

So as we begin this new year with excitement and anticipation, let’s take a deep breath and ground ourselves. And see what happens.

This sounds an excellent approach to me and instead of reflecting upon the past, we can reflect upon what is to come, what we are going to begin doing this year, or what we wish to develop. And also take each day as it comes, each day is of equal importance in our lives. For me it’s not about anniversaries – the only person who remembers me and my hubby’s wedding anniversary is my mother, I think of my father every day, not just on the day he died – so you get the idea. Make each day count.

A new year ritual I do go through is choosing a new diary. A week to a view. Not to write literary reflections in, but to simply note what I do with each day. And as I do this, my taste has changed over the last few years over what my diary’s cover should look like. And I’ve noticed that back in 2012, 2013, I was going for blue or black, but then slowly began choosing colour, earthy brown, purple, and then more recently fluffy floral in stark contrast to the corporate plains of previous years. And also weirdly enough, this changing colour sequence has been very much in synch with me and my emotions. The end of 2012 was the beginning of my midlife transition, a turbulent time for me in so many respects. But since then the diary covers have kind of moved with me into more colour, more life, more me. And I have even allowed myself to go up in size this year (only in diary terms of course :>))! Whatever next? 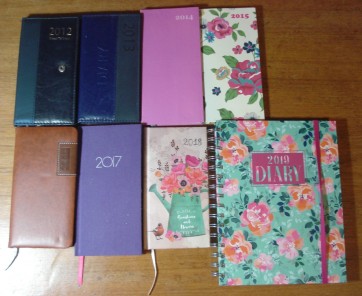 So to conclude, may your days count at any time of year and I wish you all good things.

12 Responses to Musings On New Year