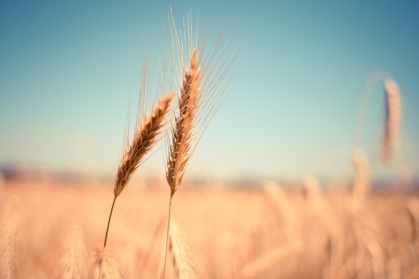 This last two weeks have been pulling my mind and heart in different directions, so a random harvest post is certainly in order –  from volunteering in social care tensions, to more insight into writing memoirs, to more work on my current painting. The thing they do have in common is that they are the regular activities I derive meaning from. So here goes!

When you volunteer in social care ( in this case, mental health) on a one to one basis, there are boundaries that you shouldn’t cross, to protect yourself and the ‘service user’ (awful term, I know). The relationship should be just about you and what I’ll call, the client, for trust purposes, with little outside interference other than safeguarding issues. You meet on neutral territory. No going into someone’s house, no being invited in for coffee. No letting someone give your presents or paying for your coffee or tray bake. There should be client confidentiality, and a time limit on your contact with them, with a due process of a beginning, a middle, and an ending, which I’ve touched on before. This process could be over a time frame of six months to a year. But can these rules be met when the person you are trying to support has dementia?

I’m going to have to keep this fairly abstract, but I hope the gist of it will come across. When someone has dementia, there comes a time when a middle person, like a relative, has to become a go-between, if your client can’t be contacted easily to make appointment times for meeting up. This happened to me very early on after contact with my client by phone soon became impossible. The problem that can be incurred by going through a middle person relative, is that you then find out far more than is comfortable about your client’s family life than you would ever know if you stick to the rules, because the relative wants to talk, they need to talk, they need to offload. And once they have you as a contact they can ask more of you. This happens because the relative needs to enlist your help in helping the person with dementia. So you do what you can to help. You take on board the texts and emails, and telephone conversations. After all, wanting to help is why you chose to become a volunteer, right? So you listen. You care. You try to do what’s required. And meanwhile you build a relationship with your client. And in this case it’s a lovely person and we have a strong bond. But when you have to eventually pick your client up at their door, through their changing life circumstances, which is sanctioned by your organisation, protection boundaries can shift fast. Just being on their doorstep changes the dynamics. I think I’m writing about this as a warning. It is so easy for this shift to take place. For example, the client can forget that you must go out and they invite you in for coffee, where you have to refuse. They want to show you valued objects, so after a few months of this you eventually get pulled in over the threshold, against your better judgement. You can be employing all the mindfulness you can possibly muster, but the shift can happen inexorably and before you know it your ‘protection cover’ is blown. And once you know more than you should, it becomes harder to carry on naturally with the person you are supporting. In a sense, you know too much. Add into the mix that you’ve got an active imagination as a creative person, and you’re sensitive to moods and nuances with a healthy dose of empathy added in, then the role gets tougher as the dementia condition of your client worsens. The whole thing begins to get under your skin. How could it not? It is then that the organisation should come in to help, especially when you’ve kept them informed.  Well, in this case, it’s coming a bit later in the day, but they are going to help now.

My lady and I are due to have our ending soon, and I want it to work well for both of us, but I’m not sure this is even conceivable when someone has dementia. I think my warning is that I’ve been volunteering for over five years now and this boundary bridging has never happened before – it’s dementia as a condition that has made this happen. It doesn’t improve, it doesn’t get better, at the present time it can’t get better. It’s this to look out for if you are on the periphery of supporting anyone with dementia and it’s another aspect of how destructive it can be to relationships in the middle to later stages of dementia. The key message is that if you are a helper, you must look after yourself and access as many services for your relative/person in question with dementia, which thankfully is what is happening in this case, so I’m having to be hopeful…

I’ve discovered something I wasn’t expecting. I’ve been getting on with my memoir on my midlife transition and the writing is easier for me than novel writing. I know what I want to cover, I’m used to writing in my own voice, as I use it here on this blog all the time. I know my own material, my own story, and what I’ve learned along the way that I want to share. I sit at my computer typing away in earnest, fully committed, but afterwards, I think – Should I be talking about that? Is it relevant? Do I want it to be relevant and why? And this questioning soon results in Do I want to do this at all? Now, I’ve finally learned the life lesson that it is very rare for any individual’s personal doubts and feelings to be unique to them, so I became curious as to what was going on. This was when I had a timely book recommendation given to me from a writer I know online. I ordered the book and have been reading it avidly. It’s truly fabulous.

Twenty writers who have written memoirs talk about what memoir writing has meant to them, as well as giving their feelings and thoughts about the differences between fiction and non-fiction and their own individual tips for memoir. Interestingly, not one of them says it is a cathartic experience as such (which you hear a good deal in online articles), it’s more a case of the memoir form suiting the particular story they want to share, while believing in it having a universal appeal to inform, help, or touch others – to share what it is to be human, in a nut shell, which is where I would be coming from.

The book is entitled Why We Write About Ourselves: twenty memoirists on why they expose themselves (and others) in the name of literature, edited by Meredith Maran.

Contributors include, Cheryl Strayed (whose memoir, Wild, I’ve recently so enjoyed reading), Ann Lamott and Dani Shapiro. They have many views in common but also distinctly differ with respect to how much to share in a memoir – whether it’s about themselves or others in their ‘story’. They also give insights into how they feel about the pressures of traditional publishing, feedback on their memoirs, and the particular vulnerabilities involved in writing memoirs, as well as clearly identifying their relationships to their own writing. And, hey, one of them lets slip it takes them three years to write a novel – now that’s reassuring, isn’t it? But most of all, they collectively show that writing memoir is a complex undertaking and they draw attention to these complexities in very human and honest ways, which I love. And in doing this they validate the mix of feelings I’ve been having about my own memoir.

Which brings me to this. Something I realised the other evening, sat on the sofa chatting to my hubby, was that writing the memoir has made me focus on myself more, and although that of course is a given, I’ve been feeling this certain lack since finishing After Black. I’ve been missing something. When you are novel writing, you have a current character or characters at the back of your mind. You muse on what scene you are going to put them into next, while they hang around in your imagination on a kind of film set having a coffee break, while they wait for you to announce ‘action’ when you sit down to write again. There is no tension in this  – not for me, anyway. On the contrary, it seems to be a kind of comfort, having something on the go in this ‘writer’s place’ , and I realised I always want to have that feeling now, just like I do with a painting in progress. And memoir writing doesn’t supply this because it’s all about me. So it has to be fiction writing. This was a light bulb moment! And to be honest, if I’d read this in a writer’s blog post a couple of years ago, I’d have thought they were being pretentious. But there we are! So what I’m going to do is pick up novel number 3, which I got to the stage of three chapters in, over a year ago now, and try to alternate between the novel and the memoir. The novel is on the same theme of midlife transition (so it should dovetail well), but with a male protagonist called Jim, and I’m looking forward to saying ‘Hello’, to Jim again and paying him some attention.

And finally to painting  – which as always, is a far more relaxing, mindful way of being for me personally. Interestingly, I’ve come across a few other writer/artists who feel exactly the same. So that’s kind of nice :>)

Here’s the current stage of my pink field painting, which I showed you a couple of weeks ago. 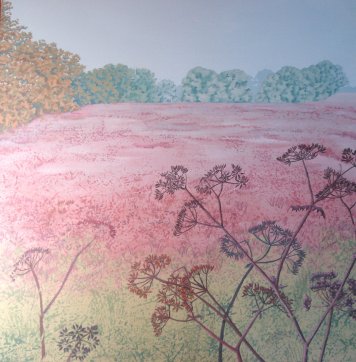 The foreground golden green has been textured with embossed wallpaper patterning, like the pink field, to suggest weeds and grasses. I’ve drawn distinct stems of seed heads into the foreground now and have begun painting them. I’m keeping a gap in the foreground structures to invite a viewer into the scene, rather than blocking off their access, so to speak. 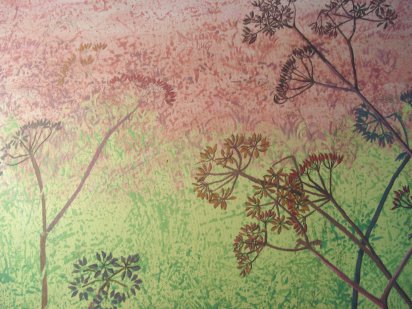 Once the foreground main stems are in place, I will be working into  the negative spaces between them to bed them in, and to create a more realistic foreground with more identifiable structures.  This will take some easing into, but it’s these final stages which I really relish.

I hope you are doing what matters to you, whether its creating or taking a much deserved break :>)