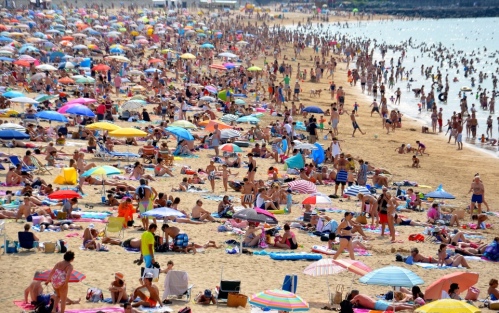 I didn’t think I’d be writing another post about the corona times we are going through with Covid 19 causing so much strife in our lives, but the recent few weeks have been so extreme, I can’t get back to my usual posts without getting this one out of my system. The post also brings into focus a kind of herd instinct prevalent in many human beings which operates in crowds and gatherings, where individual common sense evaporates, giving way to a group mindset which adopts the will of all present –  a kind of one for all, and all for one scenario. In this way, it is as far from creativity as you can get, and something I have battled with in my life for years. This is the essence of it: If other people are doing it (whatever that may be), then it must be right/alright/allowed/the way to be. It was early in my life, that I discovered I wasn’t part of the crowd, and it took quite a few years of varying experiences for me to realise I was happy not to be. Being on the outside looking in, is fine, and great for a creative life. And now on to the main thrust of this post!

Scotland has been pretty sensible about easing Covid quarantine life restrictions slowly, alongside Ireland and Wales, thanks to our First Minister, Nicola Sturgeon, who has being clear and precise in her instructions all the way through. But England has been less sensible with more confused guidelines. England are setting up for the pubs to reopen any day now, all shops to reopen, and hairdressers to reopen, with a newly sanctioned social distancing of ONE metre allowed. The priority is to enable the economy to struggle to its feet and get everyone’s lives, and I quote, ‘back to normal’.  Another easing of restrictions is allowing people to travel, which came into force first in England about two weeks ago. People can now move outside of their area for recreation, and since the UK is advising so-called ‘staycations’ instead of vacations abroad, then people are taking to the open road to grab their fun and sun in their favourite places, and one of those favourite places is the seaside.

It was shortly after this announcement by Boris Johnson, around two weeks ago, that  madness unleashed itself. All the lessons we have been able to learn during the Covid crisis, such as looking after our communities, working together, caring about and appreciating others, respecting nature and the world around us (where we saw some truly magical moments in empty streets as animals felt free to roam, safe from the predations of man), all seemed to unravel, or be proved never to have been learned at all.

On Thursday the 25th June, which was one of the hottest days of the year, tens of thousands of people travelled to Bournemouth on the south of England coast, a seaside destination made popular by the Victorians. Some people drove over 100 miles to get there. There were roads choked with gridlocked cars on the way into the resort as flocks of people swarmed onto an already crowded beach to pitch their spot in the sand, sand which was rapidly being covered by beach umbrellas, towels and suntan lotion. Soon, unable to cope with the increasingly alarming situation, the local council had to declare a major incident. There was next to no social distancing or mask wearing visible as people piled into the sea and set about their sunbathing and drinking of beer. Policemen stood about powerless to do anything about this risk to health or to the virus spreading its tentacles once again. Efforts to warn those still driving in to stay away were ignored. Forgotten were the images of patients in hospital struggling to breath from the virus, of patients released from hospital but too weak to walk, of the grief of bereaved relatives, all of this, and the fact that the virus has not gone away seemed forgotten. The drive to get ‘back to normal’ swept all of this reality away, like a retreating tide leaving chaos in its wake.

Here is one of many videos recorded at the time:

But for me, the worst thing about this madding crowd day was the rubbish which was left behind. 33 tonnes of waste had to be cleaned up along the whole coastline, with 8 tonnes from between the piers. Despite the public toilets being open, the beach was used instead.

Here are some first hand accounts:

It was not only wrappers, bottles and barbecues that were left, though there were plenty of them. Unlucky crews had to deal with human faeces left in a box on the beach and discarded underwear.

The sights and smell were horrendous, like nothing I’ve ever come across before. There was the smell of weed, urine and excrement, and we found so many empty beer bottles. There were cans, wrappers, wet wipes and even underpants. It was horrific.

(The source for the above extracts is here)

It was here that respect for nature was nowhere to be seen. Despite so many well-made and explicit programs recently showing how much we are trashing our planet, harming the wildlife and the oceans, with our flagrant disregard for nature, through fly tipping, rubbish dumping, pollution, and a lack of adequate recycling, most of the people at Bournemouth beach left their trash behind. When they set foot on the golden sands, the sands were clean. When they left, it looked like a rubbish dump. I’m sickened by it, and I find it hard to find any justification, no matter how cooped up people have been during lockdown, no matter how deprived of freedoms, for this blatant treatment of the beach they had come to bask on. It makes no sense and its shameful.

Now I know there have been many worrying gatherings recently, with plenty of herd behaviour going on, some of them perfectly justified, some of them not so much. But this beach gathering sums up something I’ve pondered on so many times. Why do people in a crowd seem to work as one and do as one, where minority voices are shouted down by the majority?

Well psychologically of course, it’s inbred in us to need and want to fit in, to avoid being pointed at as being different and to be thrown out of the safety of the cave to the dangerous wilderness outside, where a big beastie may attack us and end our days with no help from the tribe. But I’ve found this article on herd behaviour which might offer a little more insight. Here are some extracts:

‘Herding here refers to an alignment of thoughts or behaviours of individuals in a group through local interactions among individuals rather through than some purposeful coordination by a central authority in the group. Herding underlies many collective phenomena in the Internet era, ranging from everyday social behaviour, consumer choices, economic bubbles, and political movements’.

‘Compared to other gregarious species, humans are unique in developing social norms and mutually shared expectations, which inform us about what action is normal, appropriate, or fair in a given social situation.’

And we’re getting closer to the point here:

‘’Sometimes it is rational to conform to a majority behaviour in a group, even if one would otherwise choose differently. Hans Christian Andersen’s “The Emperor’s New Clothes” provides a case in point. To recall, an emperor who cares greatly about his appearance and attire hires two tailors who promise him the finest suit of clothes made from a fabric invisible to anyone who is inferior or “just hopelessly stupid.” The Emperor cannot see the cloth himself, but pretends as if he can for fear of appearing unfit for his exalted position or stupid, and is joined in this pretence by his ministers, subordinates, and subjects. Notice that the “spiral of silence”) occurs because it is rational to keep quiet given another’s silence. Standing up to tell the truth is risky given a possibility (even if it may be small) that the cloth may be visible to another’s eyes. This situation is also called pluralistic ignorance in social psychology, that occurs when a majority of group members privately reject a norm, but assume (incorrectly) that most others accept it; no one believes, but everyone thinks that everyone else believes. If such a perception holds for everybody simultaneously, this constitutes an equilibrium where one’s unilateral deviations (seem to) work against oneself.’’

And the irony is, that it is the more positive aspect of herd behavioural psychology which became a proactive force for the wellbeing of all of us during lockdown, with us all working in relative harmony to prevent the spread of the virus. But then with a build up of frustration over restricted freedoms, this same psychology seems to have been inverted and became a negative force of denial, for disregarding safety, and for polluting the environment at Bournemouth beach. And this is probably just the beginning.

As I will soon be crossing the border into England to visit my family and probably stay over, I’m planning my being careful approaches in advance, and I’m going to have to be vigilant to stick to my own rules regarding virus protocol in a place of loosening restrictions. I have to admit, I’m a little nervous after three months of ultra-safe lockdown in the countryside here in the Borders.

Do stay safe, everyone. Here’s to the ‘new normal’ which will be with us for a couple of years at least, rather than  a getting ‘back to normal’ which just isn’t viable. Let me know how you are getting along where you are and how your creative projects are doing :>)

(the beach and rubbish pictures from pixabay)